St. Artemius is a child saint of the Orthodox Church, often referred to as “the Righteous Child Wonderworker.” He was born in 1532 to Cosmas “the Lesser” and Apollinaria, peasants in the Russian village of Verkola. Cosmas and Apollinaria raised their son within a life of Christian piety, and at the early age of five his behavior was already based on Christian virtues. He was quiet, meek, God-fearing, and obedient to his parents.

At the age of twelve, while helping his father till the fields, a sudden thunder storm broke overhead. Before he could move, Artemius was struck dead by a bolt of lightening. The date was June 23, 1545.

Superstition about the bad omen of such an untimely death kept Artemius from being granted a proper funeral and burial. Many years later, however, his body was discovered lying in a clearing covered only by tree branches. It was found not to have grown corrupt. In the Orthodox church, the miracle of a person’s body not returning to dust is viewed as a one sign that the person lived a holy life in the sight of God.

In 1648, a monastery was built and placed under Artemius’ protection. His relics, as the earthly remains of a saint are referred to in official Church language, were enshrined there for veneration by the people. Over the centuries many miracles were attributed to these relics by people who have approached them with true faith in Christ.

Sadly, in the summer of 1918, as the Bolsheviks began their savage persecution of the Orthodox Christian Church, St. Artemius’ relics were among those destroyed. As Orthodox Christians we believe that God ultimately wins out over all evil. So though his earthly remains may have vanished, St. Artemius lives on eternally with God.

As a sign of this victory, Philip Zimmerman, an iconographer living in Johnstown, PA, was granted a vision of St. Artemius. Phil was told to paint his icon “for all children.” With the blessing of Fr. John Namie, the Director of the Antiochian Village at the time, a site was selected on which to build a rock shrine to house the finished icon. The shrine stands to the right of the entrance to the St. Ignatius Church. 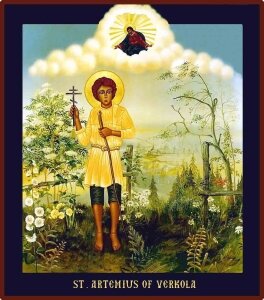 By the command of the Most High, the sky was darkened with rain clouds, lightning flashed, threat’ning thunder clashed, and you gave up your soul into the hands of the Lord, O Artemius most wise. Now as you stand before the Throne of the Lord of All, you grant healing unfailingly to those who come to you with faith and love, and you pray to Christ our God that our souls will be saved.