A courageous Russian monk with the highly improbable Anglicized name of Herman (from the Greek Germanos and Slavonic German) is the first Orthodox saint canonized in the New World for his dedicated and heroic efforts in bringing the faith of Jesus Christ to the half-civilized natives of the Aleutian Islands and Alaska. The frigid wastes of the bleak islands, as well as Alaska, were inhabited by the descendants of the nomadic tribes that had crossed the Bering Sea, many of them presumed to be from the Siberian area of Russia. For that reason, the Aleuts had a sense of kinship with the Russian missionaries.

The man who was to become St. Herman of Alaska was born in 1756, in the city of Serpukhov, which was within the diocese of Moscow and was, therefore, influenced by the great prelates of the Russian capital. From childhood, Herman showed a predilection for the church and while yet in his early youth was admitted to the Monastery of Trinity-Sergius near the Gulf of Finland, about ten miles from St. Petersburg. While serving his novitiate, he had an experience that was to inspire him to a lifetime of intense devotion to the word of Jesus Christ. He became seriously ill and when it seemed he could not survive, he resigned himself to an untimely end; however, as he prayed for deliverance, the Virgin Mary appeared to him in a vision, after which he was completely cured. The miraculous event was a constant inspiration throughout a lifetime of rugged frontier service to the Lord.

While in the Lord’s service at the Monastery of Valaam, on Lake Ladoga, he was selected with nine other monks by the Church of Russia to serve in the remote outposts of the Aleutian Islands, the outermost reaches of the sprawling country of Russia which exceed even the stark Siberia in desolation and rigor. The missionary work of these hardy monks had been made more difficult by privateers who had preceded them and had exploited the harmless seal hunters, most of whom considered all strangers in their midst to be intruders bent on their own selfish manipulation. The natives soon found that Herman and his company were men of good will whose spiritual trading posts brought them nourishment for the soul.

A monastic center was formed on Spruce Island of the Aleutian chain and was named New Valaam by Herman out of respect for the cloister whose relative comfort and security he had left for the harshness of this isolated strand. It was from this spiritual center that Herman served the people of Alaska, as well as the islands, for forty years, during which time his fellow monks dwindled in number until the sole survivor was the venerable Herman. His work for the good of the Aleuts and Alaskans was carried on alone until it was augmented by replacements from Mother Russia. Under the direction of Herman, the natives were taught how to make the most of the tillable land that their short summer season would allow.

Each passing day saw Herman converting to Orthodox Christianity a people who, after eighteen centuries, still had not heard the name of Jesus Christ. Seemingly abandoned by the rest of the world, these hardy souls came to know the meaning of faith, with churches in which they could worship and schools in which their children could be educated. Even the traders and mariners who had once considered this desolate land a stopping place where they could replenish their supplies, now remained for a time to visit with an enlightened colony. Herman and his monastery were visited because of his reputation for piety and hospitality as well.

Herman acquired with the years a nearness to the Divine which gave him powers of healing, but this served to make him all the more humble and seek complete isolation for meditation and prayer. He was denied this eremitic asceticism by the clamor of scores who sought not only his healing but also his counsel. He managed to divide his time between the service to these people in churches and hospitals and the serenity of his monastic cell, to which he would retire ever mindful of the vision he had received in his youth.

A monk in the purest sense to the last, Herman never returned to his native Russia. He died miles away from his homeland, and, in accordance with his last wish, was buried on Spruce Island. He was canonized as a saint 9 August 1970.

Taken from Orthodox Saints by George Poulos, c1990, Holy Cross Orthodox Press, Brookline, MA, pp.101-102
Because of his great love for God’s creation, St. Herman was chosen to be the patron for the camp’s Nature Center. St. Herman’s relics are enshrined in St. Ignatius Chapel at the Antiochian Village. 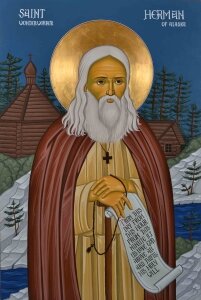 O Blessed Father Herman of Alaska, North Star of Christ’s Holy Church! The light of your holy life and great deeds guides those who follow the Orthodox way. Together we lift high the Holy Cross you planted firmly in America. Let all behold and glorify Jesus Christ, singing His Holy Resurrection!

Did you know that there is a helicopter in the icon for St. Herman?

The church wanted to move the relics of St. Herman from Spruce Island but the seas were so rough, that they were forced to call in the Coast Guard to help them transport the relics.